Wow - second card for the day. I did this specifically to enter into a challenge called Raise the Bar. It was a challenge to make a card for Lei Day. I have a Bombshell called Hula Girl that I rarely use, and thought - this was perfect to bring her out and dust her off, and color her up. 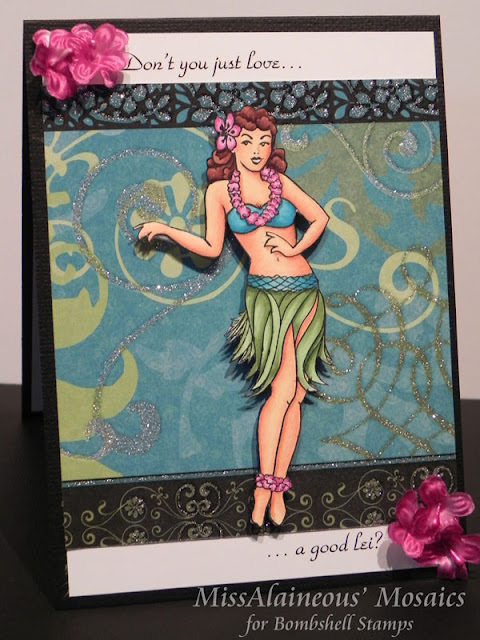 The paper was DCWV, and worked really well - That is one piece of paper, with white strips that I printed on the computer on the top and bottom. So it was a very CAS card.  I popped her upto make her stand out a bit more.

Thank you for stopping by my blog again. I am so glad you came by, and hope to see you again!

Hello all.  I was pouring through several images I had stamped up and decided I hadn't colored any of my really sweet girls lately. This Elizabeth Bell stamp was sitting there, and I thought it would be great t color it up. 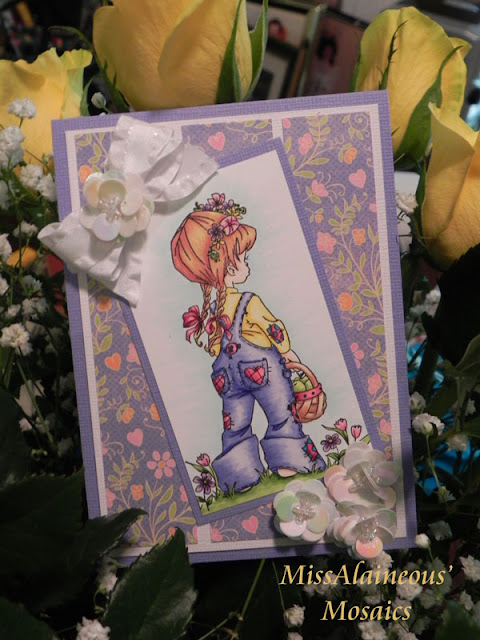 As usual, I just went to town on the coloring, and had to try to match the paper after. I really need to think a bit more about the colors behore hand - I only have so much room for paper, and unfortunatelyit is not enough to match always. I found this basic grey paper and thought it matched pretty well. :-) 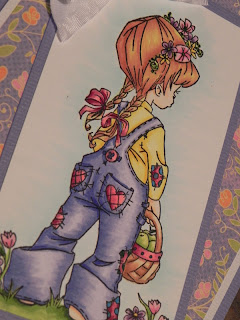 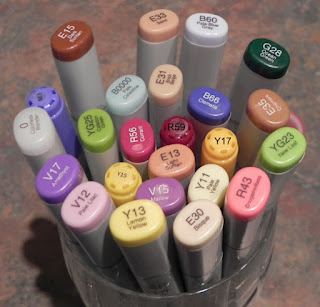 Have a great week everyone. Hope to see you back here again soon.

Posted by Alaine at 1:52 PM No comments:

Pretty in Pink - and green

iCopics challenge this week is to use your RV's. I picked up the Sweet Pea stamp and a few different colors. I started out with the flowers actually. I decided the poppies needed to be purple, so those are colored with V01, 05, 06, 09. Then I picked the greens and pink that I wanted for her dress. I really love that material that changes color in different lights, and also the ones that gradually fade into other colors, so I tried to emulate that. 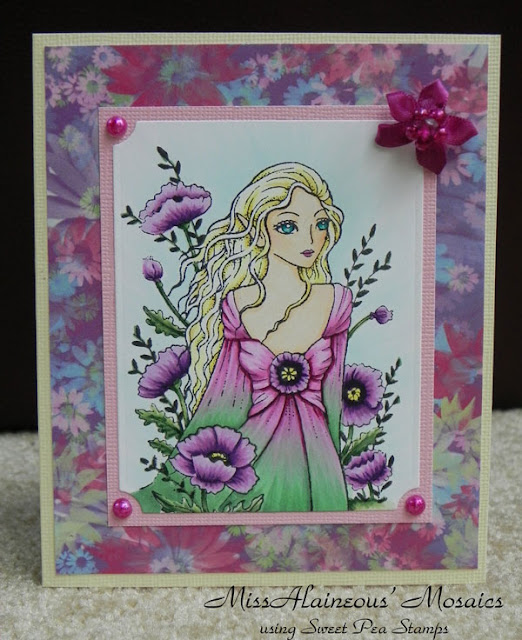 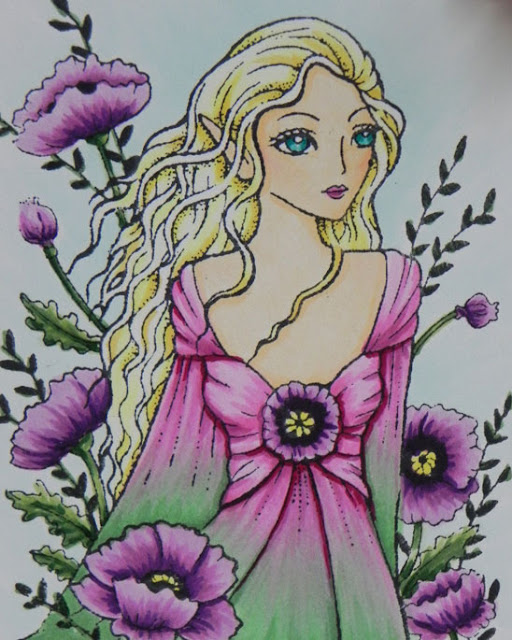 Once I had constructed the card - the flower and the pearls were colored with the RV66 and added to the card.  I mimicked the design paper and pink paper inside the card.

Thank you for taking a look at the card. I had a bunch of fun coloring her up. I hope everyone has a great weekend and that you come back again really soon.

Bettie Page - The pin-up queen. That is the theme that Alison has so wonderfully chosen.

On April 22, 1923, a star was born. A star that we all know. A star that, without her, Bombshell Stamps may not even exist (if I may be so presumptuous). Who is it? None other than Bettie Page. What better month to pay homage to the Pin-Up Queen herself than the month of her birth? So for this hop, I want you to give Ms. Page some love. Make a project, any type of project, using her as inspiration.

She is a very interesting woman. She has been a secretary, pin-up model, fetish model, actress, playboy playmate, expert witness to the FBI, Christian Missionary, institutionalized, inspiration for the love interest of a comic book hero, hand-painted on custom guitars - whew... that is a lot of stuff.

You should have arrived from Kim's blog. If you just happened along to my blog you should hop on over to the Bombshell Blog to start things out right!

Whenever I think of Bettie Page, I imagine the red with white polka dots - not sure why. So, I used that along with a shoe picture I saw. Some of the pics, I thought - maybe I needed to keep in mind that my website is PG. ;-) 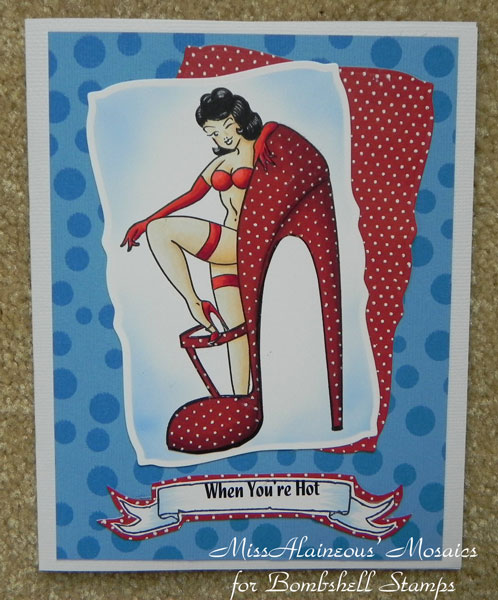 I used Girl's Ruin and paper pieced the big shoe. I also used some W4 and W3 to give it some shading.

The sentiment was printed out onmto white paper, and I used the Bombshell Banner Sayings set to stamp over it. I then pasted it on the red paper, and then cut an outline out.

Now... the interesting point about this is the paper wasn't white dots. It was yellow. See below... 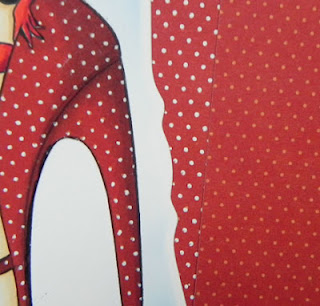 I took my white Reminisce gel pen and went over all of the yellow dots with it because I didn't have any red and white polka dot paper. :-) 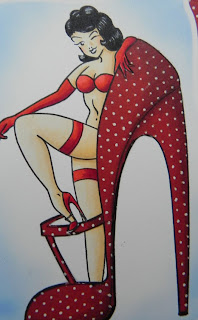 Ok... Now that you have seen my take on Bettie - you should hop on over to Theresa's blog and check out what she has for you!

A copy of the entire blog list is below.

Thought you were going to get a man-cave card did you? No way... We were out looking at the flowers and passed by a fuschia plant. Although I have looked them up before, I had never seen one in person. Now I know how to color up my Fuschias stamp from Flourishes. WHOOP WHOOP. I am pretty sure I looked a bit strange to the people... walking around taking pictures with my IPhone. But really - - it helped. 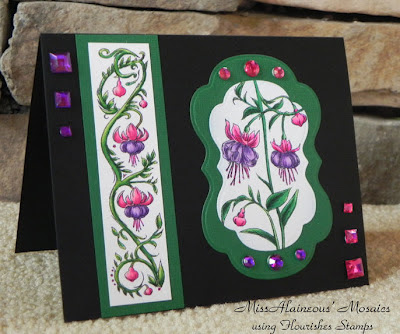 I took a picture before I placed a green mat with a white interior on the inside of the card. Wish I had taken it after, because I always like it when the inside looks finished too. 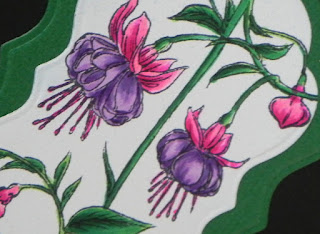 I had a blast coloring these colors, but a hard time deciding how to show them on the card. The black just makes them stand out. I looked at matching the pink and purple too, but it was too much distraction from the images.

All right... must get back to coloring. I should do the folding of clothes, but quite frankly do not want to. :-)

Have a great week all of you!

Miss April's challenge was to Alter something. You can change its purpose or just take the plain and make it beautiful, bring out your Altered ego. 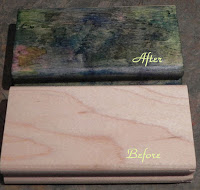 So I went back to something I felt more comfortable with - Copic Ink.

I took YG25, B26 and V15 and dripped a few drops of each on a paper plate. Then I swirled it together just a little bit... Too much and it looked muddy. To little and it is just a bunch of polka dots randomly placed on a plate.

I then dipped the wooden block from an unmounted stamp set I have in the ink. I did this on all sides until I got the marbled look. Cool huh?!!!

I then took the parrot from "A Pirate's Life" and colored him up. I used the same base colors of YG25, B26, V15 along with lighter and darker versions of those colors. I also used R24, 27, 29.  Once I was done I cut it out. I think that turned out taking longer than actually coloring it did.

I Mod-Podged it to the wood block, and then used ModPodge Dimensional magic on the top to make it smoother than the mod podge alone did. As a final note I added the flowers. And this is what I ended up with: 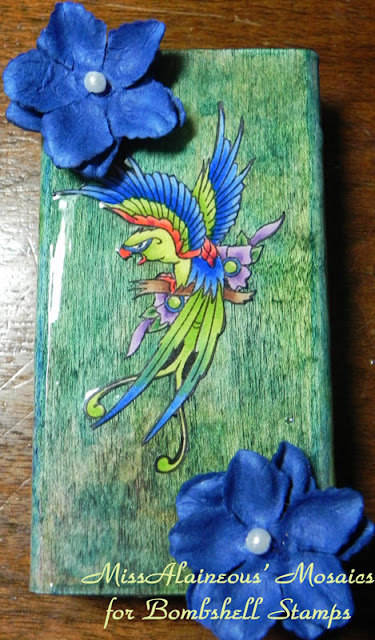 Do I have any clue what I will use it for? NO FREAKING IDEA! But it was fun all the same. :-)

I hope you jump on over the the Bombshell Stamps blog on Wednesday, and check out all the altered items created by the Bombshells and Pin-Ups. And if you join in, you could win some rubber. Just so you know. ;-)

Posted by Alaine at 7:41 PM No comments:

This card was made for the Kenny K challenge this week which was to add diamonds to your project. They could be colored diamonds, and for those of you who know me, you know I love me some bling. 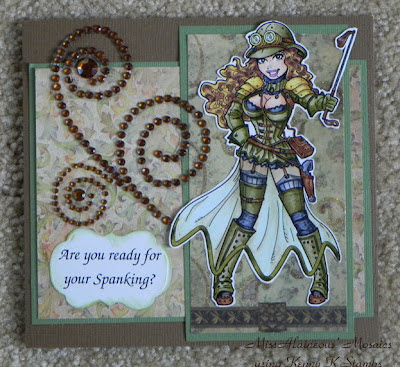 Do y'all know how hard it is to come up with a saying for a card with a woman holding a riding crop? Do you? Seriously... this was crazy. Finally I printed this out on my printer. The inside says "It is your birthday isn't it?"

I colored her up, and did something I rarely do with the cutting. . . I left a white edge around her. This si not my typical style, but I like how it turned out. 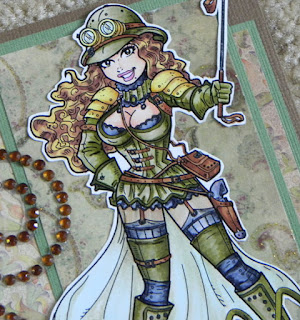 The colors I used are below. Please note for the sheer skirt, I colored the legs first, then went over them with BG0000 interspersed with the blender pen having picked up the YG91- I wanted to give it the impression of a little bit of color, but still being something.

One of this months Flourishes release week challenges is "Lovely in Lace".  The challenge was to use lace of some sort on the project. I used the lace edges stamps and tried to make a clean and simple card with it. The sentiment is from another stamp set. Both were stamped in versafine on cream paper and then clear embossed. 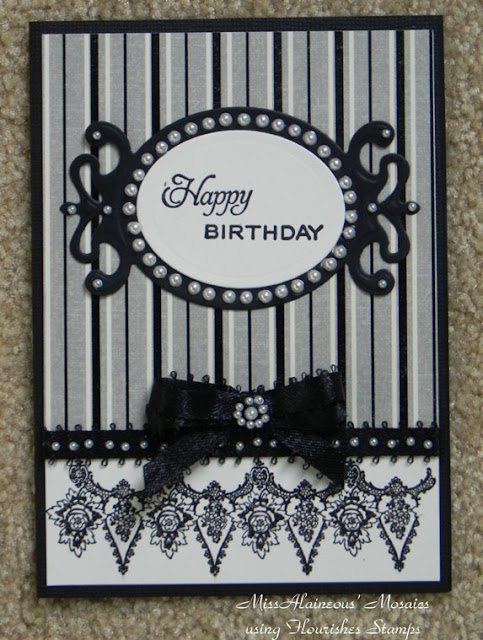 Have a great day, and Have fun being crafty. 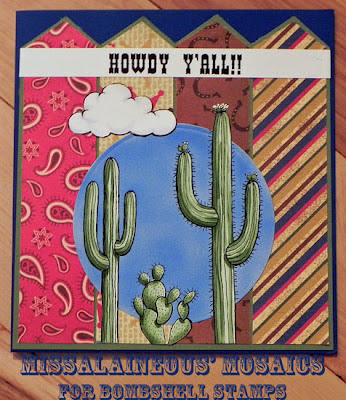 So... I am in the midst of planning our family vacation this summer, and we are going to Arizona. I know - it will be hotter than HELL - what am I thinking! But I lived there from the time I was almost 3 until I was almost 8 years old. I don't remember a LOT... but I do remember the cacti and the tarantulas. :-) So as I am in the middle of all this the sketch came around and I kept thinking about our trip and this came out.

I flipped Kathi's sketch 180 degrees... and turned the scallops into points. They reminded me of either a picket fence, or cacti. Sort of. :-)

I used Bombshell's Desert Background Digital Stamps.  I actually printed the image out twice. The first image I colored in the greens of the cacti with the light yellow flowers and the cloud (B60 BTW). The second image I cut out with a circle Nestie completely... and airbrushed it with B32. I then cut out the cacti cutting off all of the spines. I pasted the colored cacti over the circle image. This gives the Out of the Box illusion, while in reality it is completely cut out.  The Greens are G40, 82, 85.

Now why don't you head over to the Bombshell Stamps blog and check out the sketch challenge for the week.

Alrighty then.... Hope to see you again soon!

It is my Mom's Birthday (HAPPY BIRTHDAY MOM), and this is the card that I made her. It is full of sparklies! 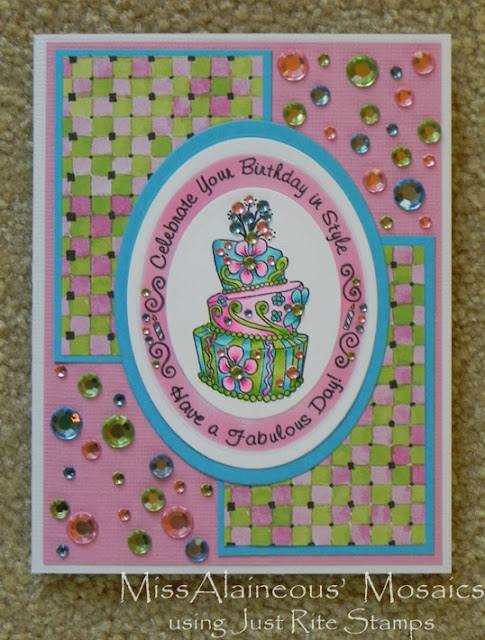 I had a blast coloring with YG0X, RV0X and B0X series, and then blinging it out!!!! There are only three layers of Ovals.  The blue, the next layer is white cut out with an oval Nestie and then sprayed with RV02 while still in the Nestie... then the inner white oval. I like how it looks like there are 4 layers. :-)

I LOVE the topsy Turvy cakes. I have this fascination with the cake competitions on Food Network, and Collette is the mistress of all that is amazing with topsy turvy cakes. These stamps reminded me so much of her cakes, and I think that the bling makes it even yummier..

OK... Please come on back Wednesday when I have a really hot Bombshell card for you. :-)

Have a great week.

New DT over at Bombshell Stamps

Bombshell stamps has announced it's updated design team members this week, and I am so happy to welcome several new ladies to our wild and wacky world.


I hope you all stop by their blogs and check them out. They are absolutely fabulous!

We are also saying a sad goodbye (well hopefully just a see you later) to 4 fabulous Bombshells from the last design team. Cheryl, Mary, Meredith and Milo have decided to pursue other activities at this time. Hopefully we will see them a lot around the forum and out in blogland because they are true Bombshells!

Posted by Alaine at 8:19 PM No comments: 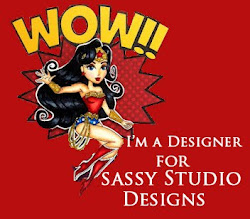